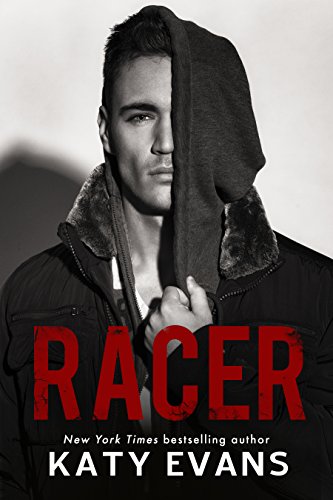 A bad boy with something to prove.
A woman with a mission.
The race of their lives.
The love of a lifetime.

I don’t think his parents expected him to live up to his name—Racer Tate—but once he felt the adrenaline rush behind the wheel, he was addicted.

He’s the fastest, fiercest driver around.

Scouting new talent brings me to his doorstep…
but his smile sends me to my knees.

The sexy, mysterious Racer Tate is not the kind of man a girl like me falls for. He’s secretive, reckless, elusive. But his proximity pushes me beyond reason, and his kiss….

This is our last chance to win, and he is our only hope. I’m supposed to watch him—make sure he doesn’t get into trouble. But it’s an impossible task. And now the one in heart wrenching, toe-curling, soul-crushing trouble is me. Because when your heart belongs to someone, their truths become your own, and their secrets become your salvation…or your curse.

He says he wants me. He says I’m the One. But he also thinks he’ll break my heart, one piece at a time until it’s gone.

ARC provided by the author via Social Butterfly PR in exchange for an honest review.

Many of us have been impatiently for this book to come out. When Katy Evans announced a novel about the son of one of the most loved fighters in the romance world (REMY freaking TATE, everybody!!), the book community exploded! Well, Racer Tate is here ladies and he will rock your world because he is very much like his father!

Racer is considered the seventh installment in Katy’s Realseries and, if it wasn’t clear enough before, this is how Racer Tate, the son of Remy and Brooke, falls in love. Racer is his own person but you will also see Remy all over him (and you will LOVE IT!). However, his obsession is not fighting, it is racing. Or at least, that is his priority in life until he meets Lana Heyworth (a woman decided to get Racer on her dad’s Formula One racing team so he can save it).

I push on faster—never wanting to be in a race like I want to race this one. Because she’s fucking there. I can feel it in my bones, and I want her to know who the fuck the best driver in the world is.
Fucking me.

Obviously, I enjoyed the heck out of this book! Katy Evans is one of my top favorite authors and she did not disappoint with this highly anticipated love story. Racer is a fantastic hero: cocky, possessive, sexy and so worth it (even though he believes he is not sometimes, poor thing!). He is 100% Tate and Lana finds it impossible not to fall in love with him.

Something happened, something is happening—every second we look at each other, every breath he and I take.

“When I get my hands on you, you’ll be made love to like you’ve never been made love to before.” He grabs my face, squeezes it and pecks my lips in the fiercest way he’s ever done. “I’m going to fuck all those moans out of you until the whole hotel and city hears you.”

I love imperfect and complex characters. I love seeing aspects in them that you can also find in real life. Both main characters are dealing with difficult situations in their lives but it’s clear that their love for each other can go past anything. The instant connection and chemistry between Racer and Lana is just THAT GOOD. Racer, as I said, is a Tate in all things important: he is a hawt dirty man just like his father and you will adore him for it. The love between this couple will melt you all over the place.

Can you love someone so hard that every part of your being feels it?
Yes, my heart whispers.

Therefore, I am rating Racer with 4.5 STARS because this story brought back all the feelings that Katy Evans provoked in me when I first met Remy and Brooke (btw, it was great seeing them again!). Lana and Racer are such wonderful characters (and couple!) and if you loved the past novels in the series, you’ll fall head over heels in love with this one too. Highly recommend reading it!

Katy Evans is a New York Times, USA Today, and Wall Street Journal bestselling author. Her debut REAL shot to the top of the bestselling lists in 2013 and since then 9 of her titles have been New York Times bestsellers.

Her books have been translated into nearly a dozen languages across the world.