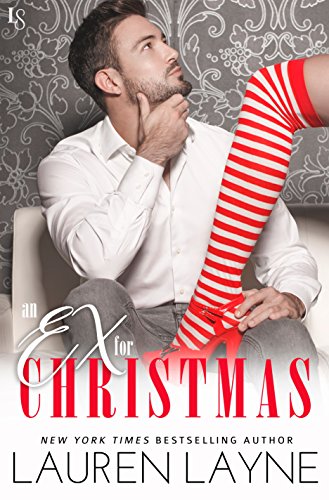 She’s making a list—and checking it twice. But is there a nice guy among all her naughty exes? The New York Times bestselling author of Blurred Lines returns with a charming friends-to-lovers rom-com.

When a psychic tells spunky, superstitious Kelly Byrne that she’s already met her true love, she becomes obsessed with the idea of tracking him down before Christmas. Kelly immediately writes up an “Ex List” and starts contacting old boyfriends to figure out which one is the one. When her college sweetheart rolls into town, Kelly convinces herself that they’re meant to be. The trouble is, sparks are flying with someone she’s never given a chance: her best friend, Mark.

Mark Blakely has watched the guys on Kelly’s list break her heart, and he’s not looking forward to watching them do it all over again. Mark’s always been there for her, but the timing’s never worked out for their relationship to be something more. Now, just as Mark is ready to move on, the sexual tension between them is suddenly off the charts. With Christmas morning around the corner, he just hopes Kelly will wake up and realize that everything she wants has been right in front of her all along.

ARC provided via Netgalley in exchange for an honest review.

And again, Lauren Layne delivers another heart-warming love story! Winter is here and Christmas is around the corner so what better way to start getting into the Christmas mood than a friends to lovers love story by one of my favorite authors! I thought (at first) this story would be about exes reuniting but it is more “complicated” than that. This is about two best friends who fall in love (or have been..) with each other.

An Ex for Christmas is a standalone novel, but it belongs to the Love Unexpectedly series (all standalones). This is Lauren’s first Christmas novel and as I said it’s a friends to lovers romance. Kelly and Mark have been best friends for the longest time, Kelly is more than ready to settle down with the love of her life, but, this love is nowhere in sight (according to her..). Our lovely heroine is in fact a believer of all things “fate” so she believes everything an unknown woman tells her: that she already knows said person. A quest starts, Kelly is going though all her exes to find this love, but everything gets complicated when she discovers that she has feelings for her best friend Mark (who *swoon* has loved her from the very beginning).

Some things just weren’t meant to be questioned; they simply were.
Mark and I are one of them, I guess.

As all her other creations, Lauren Layne made An Ex for Christmas a slow burn romance that melted my heart. I found the relationship between Kelly and Mark absolutely adorable. Their friendship is so especial: they have so many fantastic moments together and their chemistry (as friends and later as lovers) is palpable on every single page. In fact, I loved Mark from the very start because he is so clearly protective of Kelly and very much in love with her! I mean, sometimes I wanted to shake Kelly so badly because she does not see that AT ALL! And I just wanted that fantastic man to be happy.

I should be freaked out—I know I should, but truthfully what’s freaking me out more isn’t how wrong this is but how absurdly right it feels. As though his mouth was made for mine, as though we should have been doing this a long time ago.

And here is maybe the only thing that I did not enjoy as much: how Kelly is not able to see what Mark feels for her (and what she feels for him!) until almost the very end of the story. Yeah, they do realize the chemistry between them earlier and the sex (as always) is beautifully written and oh-so-sexy! Lauren’s heroes always do it for me and the slow burn is to die for! But, I felt like the ending was a bit rushed: it was amazing and so sweet but a little rushed. However, I can almost forget all this because I really enjoyed the love story as a whole and because I loved these two together as a couple!

Therefore, my rating for An Ex for Christmas is 4.5 STARS because it was an adorable Christmas-themed love story that holiday lovers will definitely enjoy! If you love this festive holiday and you also happen to love Lauren Layne’s stories, you surely will enjoy this one! Mark and Kelly are great together and their happy ending will melt your heart. So yeah, I am recommending this one, especially if you are a LL and a Christmas fan!

As I walk, I check the weather app on my phone, delighted to see that while it’s nothing but rain today, there’s a chance of a snow shower tomorrow. Nothing says Christmas break like snow.

I just miss my train, but there’s a decent-ish voice singing “White Christmas” nearby, and the platform’s not too crowded, so waiting’s not as bad as it could be.

My eye catches on a middle-aged woman who’s set up camp under one of the stairwells. It’s not unusual to see all manner of people under the streets of New York, although this one’s better dressed than most. She’s wearing a blousy red shirt, jeans, and ankle boots, and is sitting cross-legged on a plaid blanket. She’s got twigs of what seem to be fake roses in her hair.

None of that’s the weird part.

What’s weird is that she’s watching me. Intently.

We make awkward eye contact, and I give a quick smile before turning my attention back to my phone.

But I still feel her eyes on me.

Not in an unfriendly way, not in the way that makes me mentally catalog whether or not I saw any cops on my way down here who would hear me if I scream. She doesn’t seem eager to push me onto the train tracks either, and since that’s every New Yorker’s secret fear, that’s a plus.

Still, the focus is unsettling. I glance up again, and her eyes lock on mine. Her dark gaze is clear and focused, and I can’t decide if that’s more or less disturbing than if she seemed sort of hazy.

Then she smiles right at me. “Kelly.”

I get immediate goosebumps for reasons that have nothing to do with the winter weather. She knows my name.

There are a couple dozen people around. None are paying attention to me, but it’s not like I’m all alone in a dark alley.

And look, we’ve already established that I believe in fate expressing itself through a Magic 8 ball and horoscopes, and though I haven’t mentioned it yet, I totally avoid black cats, the number thirteen, and walking under ladders.

I also believe that there’s such a thing as sight. I know, because my grandma had it.

Grandma Shirley was one of those delightfully batty old ladies that most people dismissed as quirky, but nobody can deny that she seemed to know stuff. She knew when I’d win my soccer game, and by how many points. She knew when her cat’s litter of kittens would be born, down to the minute. Once she’d even predicted an earthquake, even though they’re really rare in New York.

She’d passed away when I was in eleventh grade (she’d predicted the when and how of that too), and though I didn’t inherit her talents, I’ve never stopped believing that some people see and know things that they shouldn’t. I call it the Sight.

I step closer, and the woman grins and beckons me even nearer.

I stop a healthy few feet away. I’m superstitious, not crazy.

Huh. Color me unimpressed. I mean, don’t most humans seek love? Sure, I’m recently single, and I don’t particularly want to be. And maybe I sometimes try a little too hard to find my forever guy.

But I’m not hearing anything other than generic lucky guesses from this lady.

“Sure,” I say, already starting to back away.

I freeze, because her phrasing echoes my thoughts almost exactly. A coincidence? Maybe. I don’t move away just yet, willing to hear her out.

I blink. “What? I think you may want to recheck that crystal ball. I’m single.”

Her smile merely grows. “I didn’t say you weren’t single. I said you’d already met him. You just let him go. He’ll come back to you before Christmas.”

“You’re telling me that the love of my life is one of my exes?”

She extends both of her palms as though to say, There you have it!

I stifle a little surge of disappointment. Clearly she hasn’t met my exes. There are some decent ones in the mix, but mostly they’re duds, and none of them make my heart beat faster. Well, maybe—

Thankfully, I feel the rumble of an oncoming train, and a glance over my shoulder tells me my ride outta here is approaching.

“Thanks very much,” I say with a strained smile. “Merry Christmas.”

“Happy holidays,” she says with a nod, standing and gathering up her blanket. Apparently she’s taken a cue from Madison Meyers and is sticking close to the PC route. Fair enough.

I lift a hand in a wave and move toward the train, but her next words give me a fresh wave of new goosebumps.

“Tell your parents happy anniversary. Thirty’s going to be a magical year for them.”

I whip my head around. “How did you—”

The woman is gone.

If a woman I’d never met was right about my parents’ anniversary, was she also right about other stuff?

Have I already met my one true love?

Lauren Layne is the New York Times bestselling author of romantic comedies. She lives in New York City with her husband.

A former e-commerce and web marketing manager from Seattle, Lauren relocated to New York City in 2011 to pursue a full-time writing career. She signed with her agent in 2012, and her first book was published in summer of 2013. Since then, she’s written over two dozen books, hitting the USA TODAY, New York Times, iBooks, and Amazon bestseller lists.

One thought on “Release Blitz + ARC Review: ‘An Ex for Christmas’ by Lauren Layne”