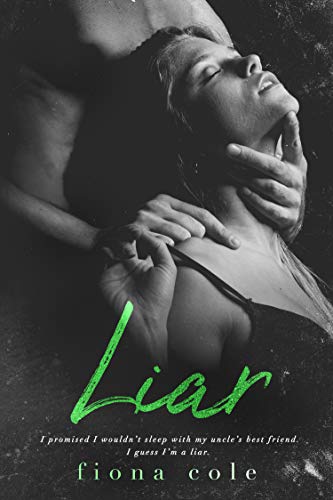 He was my uncle’s friend, and I was too young for him.

But in the heat of the moment, against the wall in a darkened hallway of an illicit club, none of those things mattered. It was just one night of giving in to what we both wanted.

I never expected to see him two years later, sitting across me during a family dinner, encouraging me to do my internship for his business.

On day one we both agree that repeating that night would be a mistake. But it’s a mistake we can’t help but make again and again.

The rules are simple. We can’t tell my uncle. We have to be content with our hotel rendezvous. And we won’t fall in love.

But we both know we’re liars.

Kent stood in the doorway, watching my uncle and dad until they disappeared. Then he stepped back into the kitchen and turned to face me.

I ignored his stare and focused on rinsing the dishes. I didn’t want to meet his eyes and let him see the fire that still simmered in my chest. I peeked from the side of my eye and took in the way he stood tall with his hands shoved into his pockets. He didn’t say anything until he was only a couple feet away.

“Did you have a good time with your boyfriend?”

“He’s not my boyfriend. And it was fine.” I paused when I set the plate in the dishwasher, giving him my full attention. “Why do you care?” I asked like a challenge. Maybe the same heat that singed me at the thought of him with another was burning through him too.

His brows lowered like he was also confused about why he’d asked. Finally, he shook his head and answered. “I don’t. It was just a friendly question.”

I snorted at his bullshit answer. He’d stayed back just to ask a friendly question? I doubted it. I closed the dishwasher and stood to my full height, shoulders back like I was preparing for battle. He wanted to ask about my night, so I figured I’d return the favor.

“Well, then, as your friend, did you have a good night with your lady-friend at Voyeur?” The fire burning through me intensified as images of our night at Voyeur assaulted me. Did he get her off in the hall? Did he use kid-gloves with her?

He pulled his shoulders back to match my pose. We stood like we were preparing for a duel, and I didn’t even know what we were battling over. Who would cave first and admit to the jealousy? Who would give in to the tension tugging between us?

“Good enough, I didn’t have to close my eyes and imagine someone else.”

Everything in me froze and pulled tight like a screw was twisting the muscles in my body. My jaw clenched around the blow that almost knocked the wind out of me. His stance softened when he noticed the hurt his words had caused.

But I didn’t want his kid gloves.

I didn’t want his pity.

I wanted to land my own blow.

I wanted to make him squirm.

I relaxed my body and licked my lips, knowing I’d already won when his eyes dropped to track the movement of my tongue. “What would you say if I told you I imagined you?” His eyes widened a fraction, and the first drop of victory spread, urging me to go further. “As I sat astride him, I closed my eyes and thought about being tied down and at your mercy.”

“Careful, Olivia,” he managed to squeeze out past his tight lips and clenched jaw.

I smiled at his warning. I’d only just begun.

Would like to win an eARC for Liar? Or how about 1 of 5 signed paperbacks via Goodreads? Enter both opportunities below for your chance to win now!

Fiona Cole is a military wife and a stay at home mom with a degree in Biology and Chemistry. As much as she loved science she decided to postpone her career to stay at home with her two little girls and immersed herself in the world of books until finally deciding to write her own. Where You Can Find Me is Fiona’s debut novel and will hopefully be the first of many.