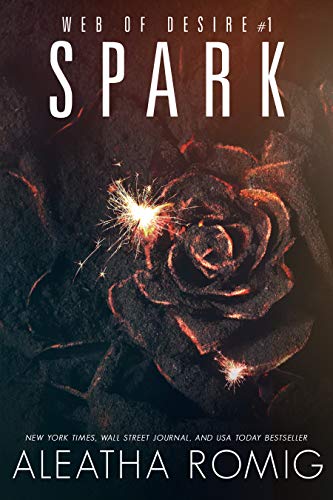 “From a little spark may burst a flame.” ~ Dante Alighieri

A simple ember to dried kindling can ignite a raging fire.

I’ve made my mark and proven my loyalty to a man, a city, and a way of life. That loyalty has provided me with all the spoils of success. Until now that hasn’t included a woman at my side.

What is it about this unobtainable beauty that brings my untapped desire to life?

Cracking open the stone and striking the flint is my doing. What follows is hers.

With something so intense will this spark lead to a blazing inferno? Will we make it out of the ashes before everything I hold dear is ravaged?

From New York Times bestselling author Aleatha Romig comes a brand-new dark romance, Spark, set in the same dangerous world as Secrets and Twisted. You do not need to read the Web of Sin or Tangled Web trilogy to get caught up in this new and intriguing saga, Web of Desire.

SPARK is book one of the WEB OF DESIRE trilogy that continues in FLAME and concludes in ASHES.