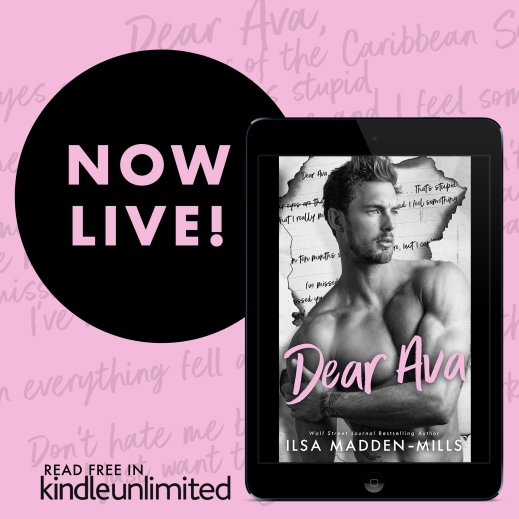 “Dear Ava is heartwarming and angsty and don’t get me started on Knox. Read this book! You will love Ava’s fight and Knox’s alpha.” – Tijan, New York Times bestselling author

The rich and popular Sharks rule at prestigious, ivy-covered Camden Prep. Once upon a time, I wanted to be part of their world—until one of them destroyed me.

The last thing I expected was an anonymous love letter from one of them.

Please. I hate every one of those rich jerks for what they did to me. The question is, which Shark is my secret admirer: Knox, the scarred quarterback and their leader, Dane, his twin brother, or Chance, the ex who dumped me…

Your eyes are the color of the Caribbean Sea.That’s stupid. What I really mean is, you look at me and I feel something REAL.

It’s been ten months since you were here, but I can’t forget you.

I’ve missed seeing you walk down the hall. I’ve missed you cheering at my football games. I’ve missed the smell of your hair. The truth is, I wanted you back then—but you had him.

And then everything fell apart that night.

Don’t hate me because I’m a Shark. I just want to make you mine. Still.

An excerpt of Dear Ava appeared in the anthology Team Player 2 in 2019. (No longer available.) This full-length version is 100,000 words.

Let me start this by congratulating the amazing Ilsa Madden-Mills for writing such an outstanding love story. It takes a whole lot now for me to rate a book with my special 5+ stars rating but Dear Ava deserves it 100%. I’ve been impatiently waiting for this story ever since reading a sneak peek of it in the Team Player 2 anthology and the wait has been so worth it. Ava and Knox’s story is an emotional roller coaster you don’t want to miss.

So, Dear Ava is a standalone contemporary romance and it tells the story of Ava Tulip Harris, a student who goes through a heartbreaking experience no woman should ever suffer. Ava has changed but the Sharks at Camden Prep have not. They are vicious and do not care about what happened, they don’t believe her. But Ava has a secret admirer, a Shark who says in his love letters that wants to love and protect her. Enter Knox Grayson. He is the lead of the Sharks but he also is Ava’s secret admirer. He is not what everyone thinks of him and he will do anything for Ava. Does this not sound as EPIC love story to you?

WOW, guys. I am overwhelmed by feelings. ALL THE FEELINGS. Such a beautiful love story! An intense, heartbreaking, angsty but also sweet, romantic and sexy enemies to lovers romance. Ilsa has written a unique love story and everything was on point. It’s surely not an easy one to read, it deals with themes such as sexual assault, addiction and even suicide, but it’s so worth it. Ava and Knox (and the people around them), you just have to meet them because they will steal your heart.

“No one wanted them to be together. None of the gods approved. Who’d love the king of the underworld?”
“The right person.”

And of course, what is the best thing about Dear Ava is Ava herself and her SA, Knox. Ava is kick ass heroine, fighting to live again after what happens to her, fighting for her brother Tyler and fighting to trust again when she starts falling for “the enemy”. Knox, obviously, is not the enemy. He is such a swoony hero: protective, romantic and definitely sexy. Even though the main focus is Ava, still the love story was beautiful and the chemistry was explosive. With that, drama, suspense and a beautiful ending, that is what made me devour this book in just a few hours. I literally could not stop reading!

“Dear Ava, today is the beginning of anything you want,” he says in my ear.
I clutch his shoulders. “You. Always you.”

Therefore, my rating for Dear Ava is my special 5+ STARS because it was the perfect romance read for me. It had everything I enjoy experiencing while reading a good romance novel and so much more. Of course, it has some triggering themes as I said earlier but the love story and these characters are so worth it. Ava and Knox are perfect for each other and their HEA was just epic. A love story that makes you think, believe and swoon. Highly recommend!

“What do you want?” Knox says with as sneer as I ease in the football locker room. Cold eyes flick over my cheer skirt then move up and land on the hollow of my throat. It’s not cool enough at night for our sweater uniform so tonight my top is the red and white V-cut vest with CP embroidered on my chest.

He whips off his sweat-covered jersey along with the pads underneath. “I don’t keep tabs on my best friend for you. Get out—before I scare you.”

But I can’t stop looking at him.

His shoulders are broad and wide, his chest lightly dusted with sparse golden hair, tan from the sun, rippling with powerful muscles, leading down to a tapered and trim waist. He has a visible six-pack, and my gaze lingers briefly on a small tattoo on his hip, but I can’t tell what it is. He isn’t brawny or beefy-looking like one might expect from a guy blessed with his athletic prowess, but sculpted and molded and—

Dropping my gaze, I stare at the floor. I shouldn’t be ogling him. Chance is my maybe-boyfriend.

I hear male laughter from one of the rooms that branch off from the locker room, maybe the showers, and I deflate, guessing that’s where Chance is.

Glancing up, I intend to ask him to tell Chance I came by to congratulate him on his two touchdowns, but my voice is frozen. Knox has unlaced his grass-stained pants and is shucking them off. His legs are heavily muscled and taut, unlike the leaner build of Chance. His underwear are white and tight, cupping his hard ass, the outline of his crotch—

“Like what you see, charity case? You can look, but you can’t touch.”

Anger soars, replacing my embarrassment. I know I’m just the scholarship girl at Camden, but why does he have to constantly remind me?

“Don’t worry about me touching anything. I don’t like ugly.” The words tumble out before I can stop them. I meant his superior attitude, not his face, but I see the moment when he freezes and takes it the wrong way.

He touches his face, tracing his scar while his jaw pops. “Get the hell out. Only players allowed in here.”

I pivot and go for the door, forcing myself not to run. “Asshole,” I mutter.

His laughter follows me.

Eight of her eleven novels have placed in the Amazon Top 10 Best-seller List: Dirty English #1; Fake Fiancée and I Dare You #2; I Bet You, Filthy English, and Very Bad Things #6; Boyfriend Bargain #8; The Last Guy, her collaboration with Tia Louise, #4.

A former high school English teacher, she adores all things Pride and Prejudice, and of course, Mr. Darcy is her ultimate hero.