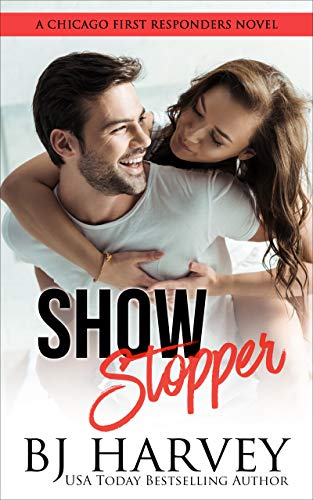 The first time they meet it’s by chance. The second is surely a coincidence. The third…it’s either destiny or he’s a stalker.

Renee Hamilton has a thing against men in uniform. In her experience, they play hard, lie harder. Marco Rossi has a thing for feisty brunette women with a backbone and a smart mouth, especially one in particular who’s playing hard to get.

She’s fiercely independent and wants better for herself.

He loves helping people so much it’s literally his job.

Lucky for Renee, Marco has a hose, he knows how to use it, and he happens to love putting out all kinds of fires; real or otherwise.

USA Today Bestselling Author BJ Harvey brings you Showstopper – Book 1 in a new spin-off to the Cook Brothers rom com series, featuring Chicago first responders fighting the good fight and finding love at the same time. Set in the same world as the Bliss, Game, and Cook Brothers series before it, this title can be read as a complete standalone.

“Do you come here often?” I say without thinking. Oh shit, talking about cliché. I open my mouth to take it back, but she beats me to it.

Her narrowed eyes snap to mine. “Seriously?”

I try to muster up some charm in the beautiful face of animosity. “What I mean is, I haven’t seen you here before.” That earns a new quirked brow. She’s totally not going to make this easy for me. She’s a challenge, and I’m hooked on figuring her out.

She quirks a brow. “Do you come to ladies’ night and try to use your big muscles and suave moves often? Or maybe you just pull out the ‘I’m a firefighter; I’ve got a big hose and I know how to use it’ line and wait for women to swoon and fall at your feet?”

My lips curve into an amused smirk. “Is it working? Because my next go-to is to say I can take them to the firehouse and show them my big truck, and if they’re really good, I’ll let them slide down my long fireman’s pole.”

Her eyes widen, and I don’t miss the slight quirk of her lips. The fact I’m going toe-to-toe with her seems to have surprised her. It also makes me want to do it again and again.

“Just so you know, I came tonight with my crew because we had a hard night last night. It just coincided with ladies’ night and some of them were coming anyway. I know the owner, so yes, I’ve been here a few times before, but I’ve never seen the ice queen in the corner shooting daggers at me all because she thinks I’m a player without any good reason,” I reply.

I’m sorry, but your friend is currently pawing all over my sister. I’m not sure the good-guy, knight-in-shining-armor routine you’ve got going on is gonna fly if that”—she points over to where Scotty is indeed acting like an octopus with Hayley—“is the kind of guy representing your crew.”

“Scotty is one of a kind. He’s genuinely harmless, but he is good people.”

“And what about you?” she asks curiously, her hazel eyes pinning me in place. God, that look on her face is doing bad, bad, good things me. Something about her sass and attitude is hitting all the right buttons.

“I don’t have time for games.”

I frown, completely confused. “Why?”

“Because then I’d have a reason to throw a drink in someone’s face.”

BJ Harvey is the USA Today Bestselling Author of the Bliss Series. She regards herself as a smut peddler, suspense conjurer, and a funny romance thinker upper. An avid music fan, you will always find her singing some hit song badly and loving every minute of it.

She’s a wife, a mom to two beautiful girls, and hails from what she considers as the best country in the world—New Zealand—although she currently lives in Perth, Australia.