The Austen series is coming to an end. The final book in the series is LIVE!
I’m so excited to read Pride & Papercuts, a modern love story inspired by Jane Austen’s Pride & Prejudice! Have you grabbed your copy yet? 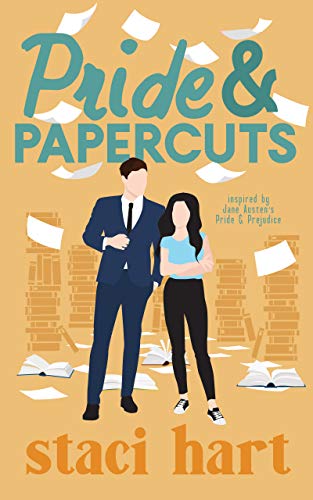 Hate is a strong word.

Depending on the company, loathe is a good substitute. Abhor might be a little fancy, but it gets the job done. But the word that really sums up how I feel about Liam Darcy is, without question, hate.

He doesn’t seem to think much of me either. The second he lays his fault-seeking eyes on me, he sets out to oppose me. Everything about him is imposing, as if he consumes the nearby air to power the rise and fall of his broad chest, and it’s clear he resents my presence on his advertising team. Every idea I have is shot down. Every olive branch I offer is set on fire by nothing more than the blistering coals he calls eyes.

In return, I light him up with my words.

It’s not as if he can dismiss me, since I work for his client, Wasted Words. Instead, he’s forced to tolerate me, which seems the closest we’ll ever be to friends. Fine by me.

I can be civil and still hate Liam Darcy.

But if there’s more to him than his exterior shows, I won’t be able to hate him at all.

I might stumble over that line between love and hate and fall right into his arms.

Staci has been a lot of things up to this point in her life — a graphic designer, an entrepreneur, a seamstress, a clothing and handbag designer, a waitress. Can’t forget that.

She’s also been a mom, with three little girls who are sure to grow up to break a number of hearts. She’s been a wife, though she’s certainly not the cleanest, or the best cook. She’s also super, duper fun at a party, especially if she’s been drinking whiskey.