When Clara Delany walks into the Aces High Motorcycle Club’s hangout, she’s hit rock bottom. She’s hiding her car from the repo man, she has less than two dollars in her bank account and the only employment she can get is delivering messages for a criminal.

All because of a man. Therefore, she’s sworn off them.

And then she meets West “Buck” Hardy, president of the Aces High MC.

Buck also meets her, and the minute he does, he makes it clear (to everyone but Clara) that they’re starting something. Since Clara doesn’t get that message, she decides to leave Buck and sort out her life in order to come back to him clean.

She’s not gone but hours before life hits Clara with another blow. Which means Buck and his boys have to ride in and save the day. After that, Buck makes no bones about where they stand.

Welcome to the first novel in the Wild West MC series which will tell the stories of the brothers of the Aces High MC, the Resurrection MC and the Chaos MC…and the women who love them.

Kristen Ashley is one of those top safe auto-buy authors for me because I know she will deliver a kick-ass romance. When she announced a new MC series, I was all over the idea because her Chaos series is one of my all-time favorites. She starts her Wild West MC series with a bang, introducing a whole crew of complex characters and giving us the love story of its current president. In pure KA style, she stars the new journey of the Aces High MC.

Still Standing is the first installment in this series and it’s the story of Clara Delany and West “Buck” Hardy. Clara is about to hit rock bottom, she has nothing left (besides her best friend) after her ex-husband screws her over and then is when she enters the Aces’ hangout to deliver a message to Buck. Buck easily finds more to Clara from what is visible and sparks fly between them. With loads of tension, chemistry, angst, a big gang of secondary characters, suspense and emotions, this love story flows.

Many of you know that Kristen Ashley’s stories are long as heck. And I love them! I don’t know why I love it because I am not a huge fan of that long of a novel, but I sure am when it comes to KA. I have to say, I read Still Standing in about a day and that’s really quick for me. I was so into this story and its characters. Buck and Clara’s chemistry was off the charts and I loved the interactions with the rest of the members in the club and with Buck’s children. I am a massive fan of family/friendly interactions in romance and this book definitely has those! I always love how KA develops all the relationships in her stories and there is no exception in this one.

“You stake a claim, you stake it because you want what you’re claimin’. Then you keep hold, no matter what you gotta do to keep it. I claimed you and I’m keeping hold.”

I enjoyed many, many aspects of this novel. Though, I have to say one thing. It’s not my favorite from KA. There is a moment in the story that really made me question Buck’s behavior towards Clara and how both react after it. I had to stop for a minute because I really wanted to kick Buck’s ass and shake Clara so badly. Did I get past it? Almost but not entirely. Did I still enjoy the rest of the story and its end? Yes, I sure did. Still Standing is typical KA style, with amazing characters and a couple that burns the pages. It sure left me wanting more of this crew and Kristen did left us without any ideas of whose story comes next. I am so curious to know, that is for sure!

“It’s never, not ever, easy. The key, gorgeous, is to stay standing.”

Therefore, I am rating Still Standing with 3.5 STARS because it has started a new MC series that sure looks like it has incredible potential, with its group of unique characters and everything happening around them. I still loved Buck and Clara’s happy ending, loved their explosive chemistry and their loving relationship with the Aces’ crew and Buck’s children. As I said, it’s not my favorite but I still enjoyed it overall so I am definitely waiting to see who is the next couple getting a story in the series. A pretty good start! 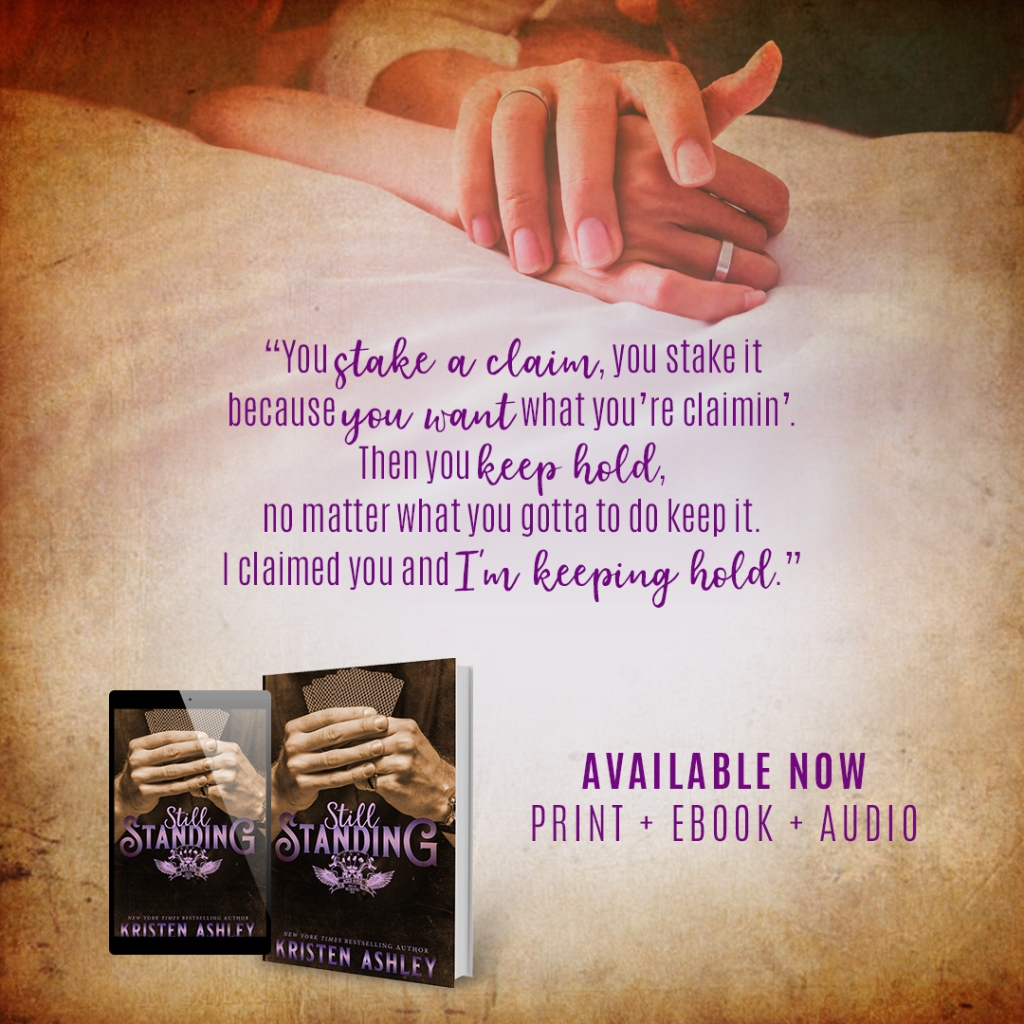 “Okay, so then does Tia have to sleep with one, or, say, all of your boys?”

“Don’t do that shit. You know that’s not what I’m talkin’ about.”

“So maybe you’ll explain what you’re talking about.”

“I would, you shut your trap.”

I shut my trap and stared at his shadowed head.

He stared at mine.

Then he muttered, “Christ, need my head examined.”

“You could get off me,” I reminded him.

“Is this shuttin’ your trap?”

I shut my trap again.

“You take of care my house and my business as well as me.”

“What does that mean?”

“That means you move outta the apartment before they kick your ass out. You move into my house. You keep it clean. You keep me fed, that is, when I’m not feedin’ you, and I like to cook, so mostly, I’ll be feedin’ you. You come to work with me and take care of the office, and you go home with me.”

My God, it didn’t sound like a sex-for-safety arrangement.

Kristen Ashley is the New York Times bestselling author of over sixty romance novels including the Rock Chick, Colorado Mountain, Dream Man, Chaos, Unfinished Hero, The ’Burg, Magdalene, Fantasyland, The Three, Ghost and Reincarnation, Moonlight and Motor Oil and Honey series along with several standalone novels. She’s a hybrid author, publishing titles both independently and traditionally, her books have been translated in fourteen languages and she’s sold over three million books.